This is a summarised, infographic filled version of the official India Tourism Statistics for 2019. All the content of this article can be used freely by anyone. Please feel free to link to or download any content, image or infographic in this article for any purpose.

The statistics in this article is divided into sections: 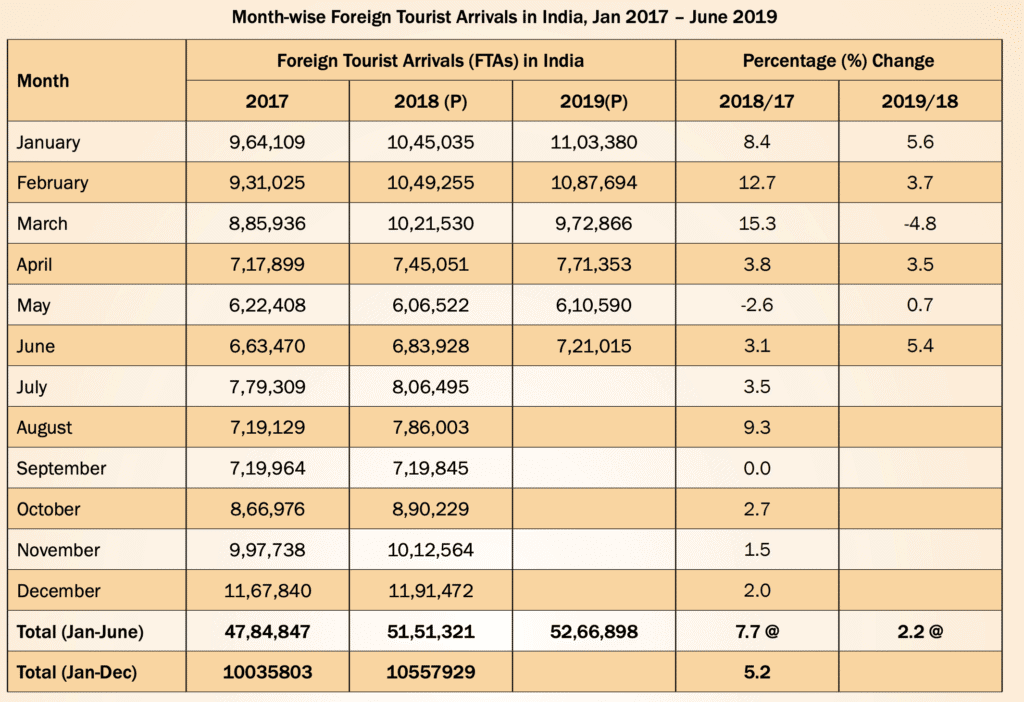 The top 5 source markets for Foreign tourist Arrivals were Bangladesh (21.37%), United States (13.80%) & United Kingdom(9.75%), Sri Lanka(3.35%) & Canada (3.32%). It can be argued that the majority of FTAs from Bangladesh could be to visit friends/relatives, medical treatment or on business rather than purely for tourism. 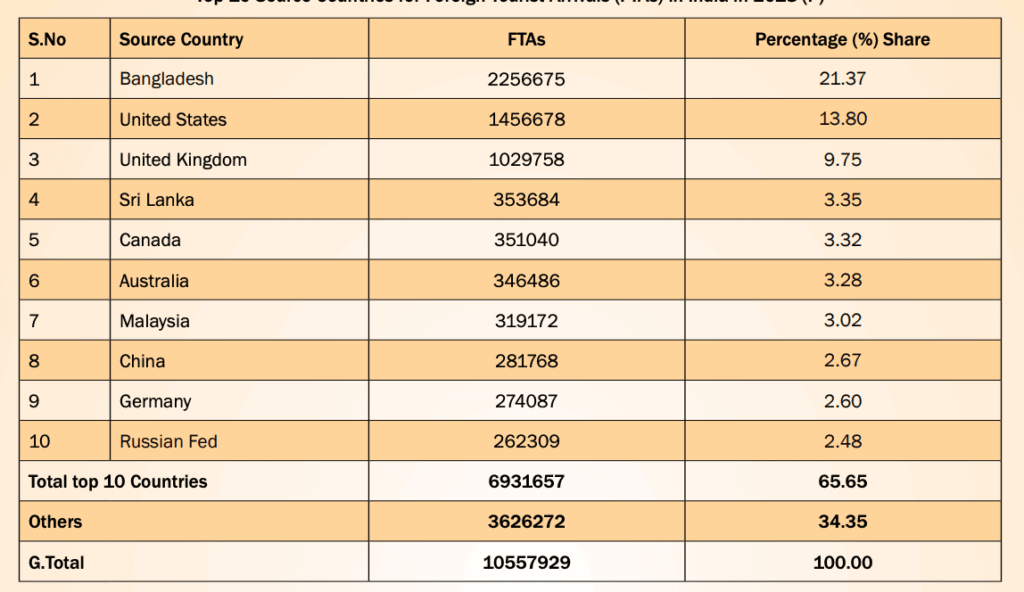 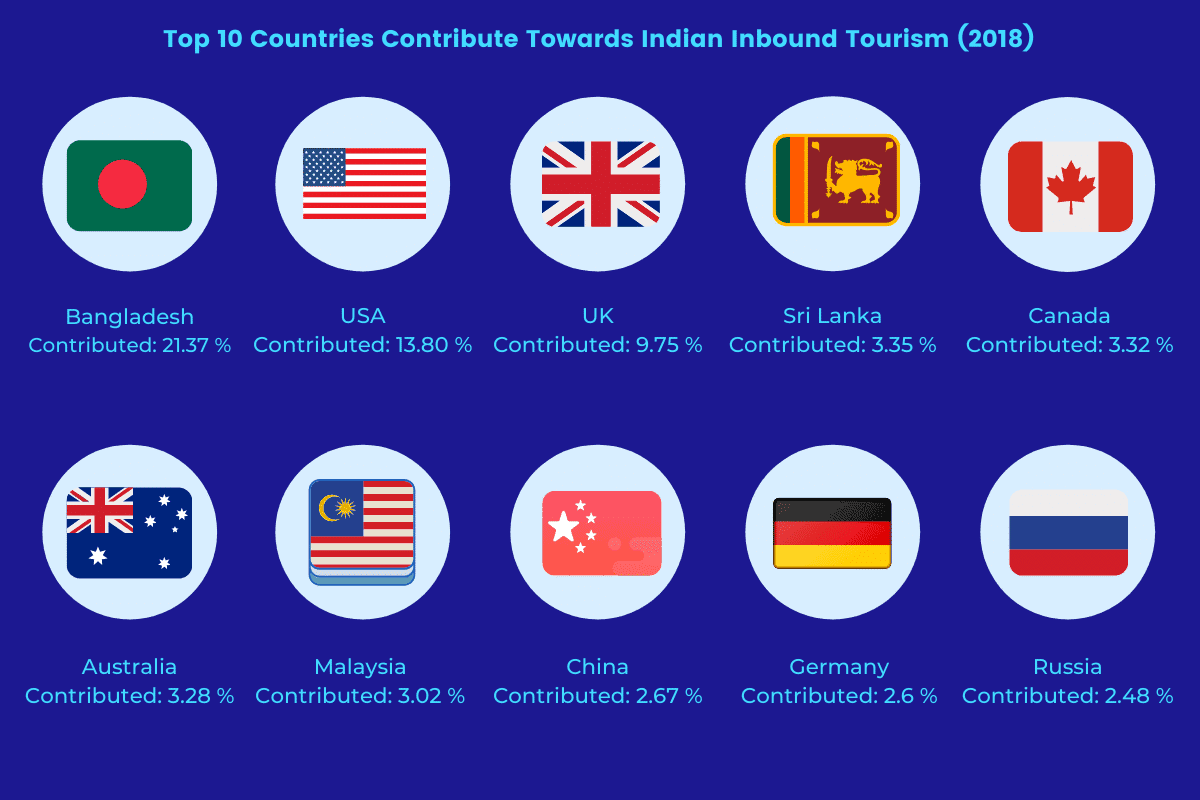 Total Foreign Exchange Value due to tourism activities is expected to hit $29 billion in 2019. This is a decrease of 3.3% compared to the previous year over the same period, which can be attributed to a decrease in tourist arrivals in the month of March due to national elections. 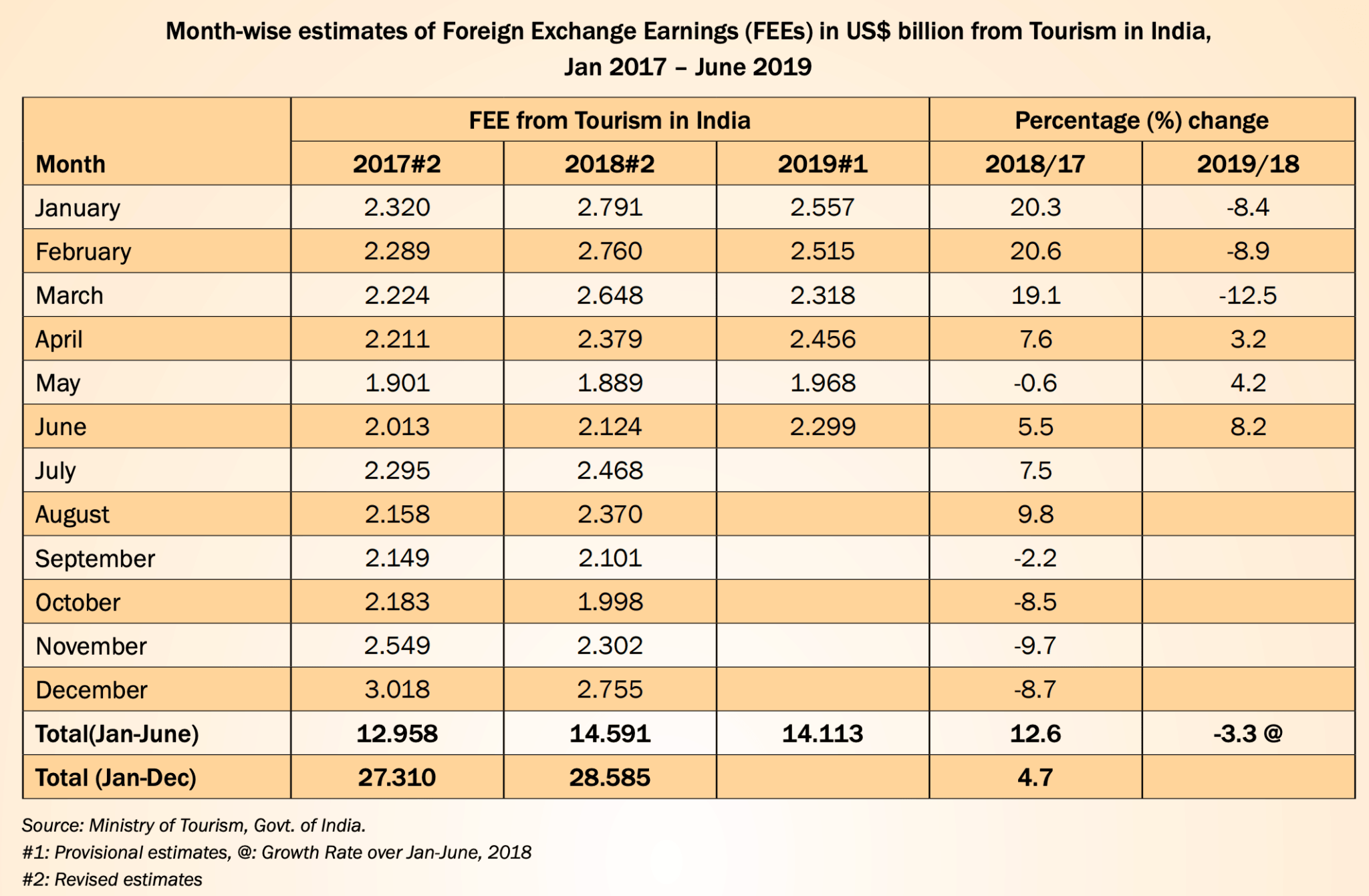 Weather condition at different tourist destinations is one of the important determinants of tourist arrivals. In the past, seasonal variations have been observed in FTAs to India. For India, the 1st and 4th quarter of a calendar year constitute the peak quarters. 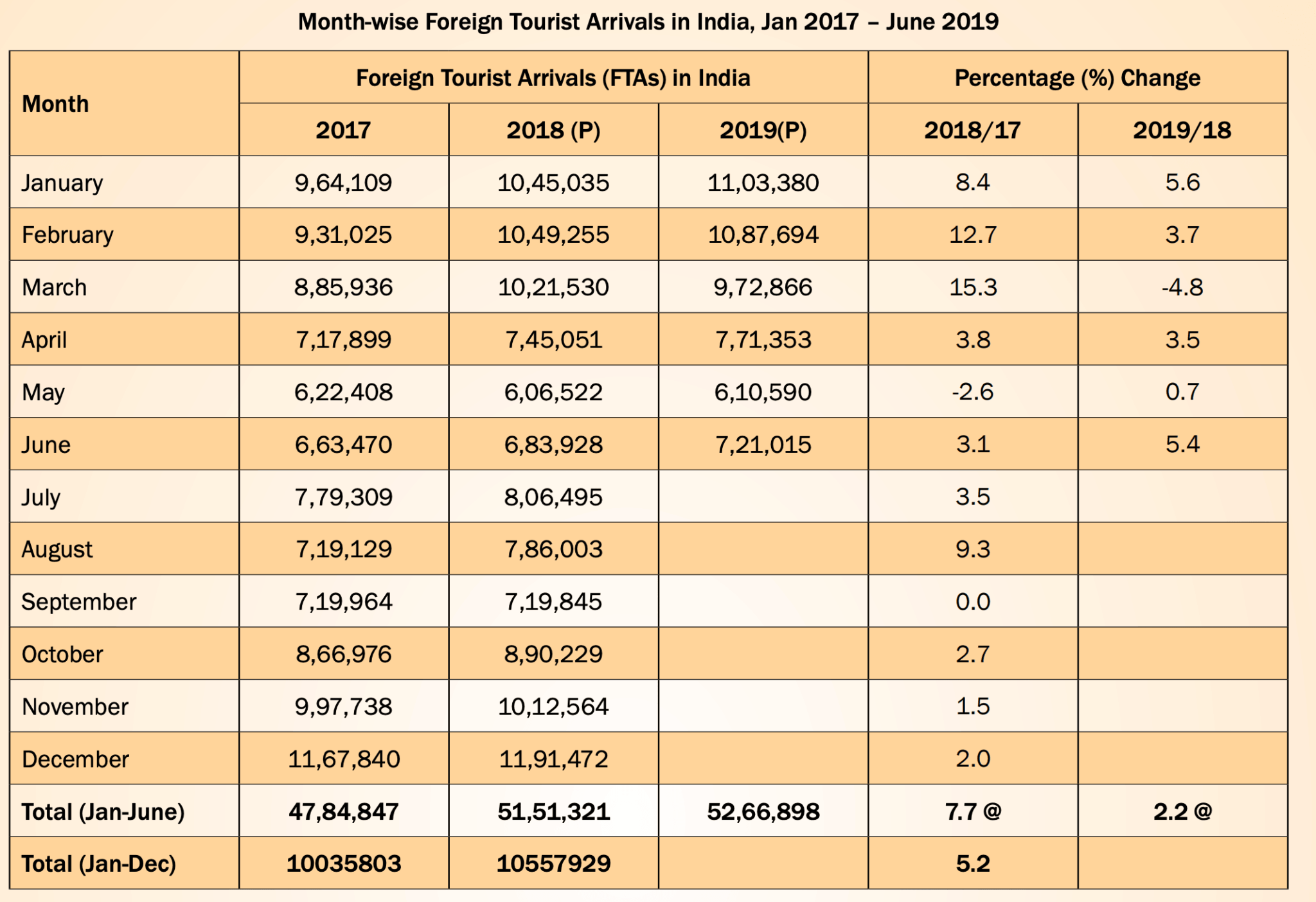 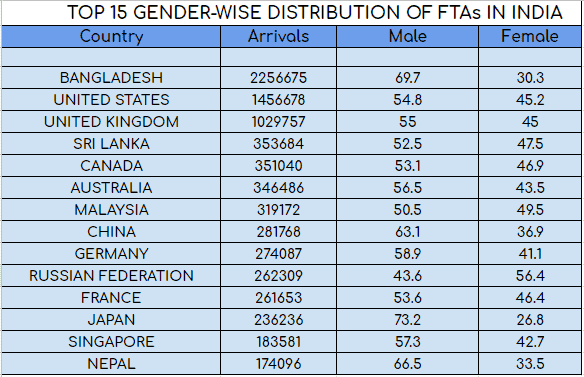 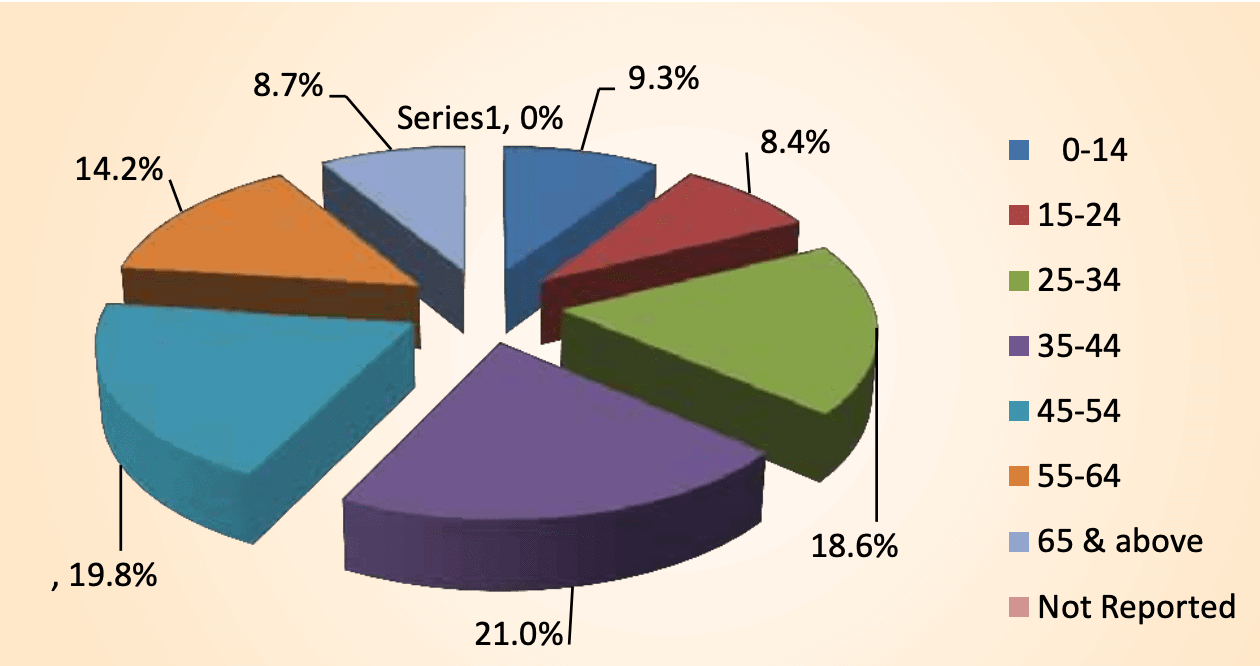 Foreign Tourist Arrivals in India According to Purpose

As per the analysis 62.4% of foreign tourist arrivals was for the purpose “Leisure, Holiday & Recreation” followed by Business and Professional (16.3%), Indian Diaspora (13.5%), Medical (6.1%) and Other Purpose (1.7%). The numbers are yet to be released for 2019, but the percentage change is not expected to deviate more than single digits.

Average Duration of Stay Of Foreign Tourist Arrivals In India

Tourism is one of the largest foreign exchange-earners. The importance of tourism as an instrument for economic development and employment generation, particularly in remote and backward areas, has been well recognized the world over. The benefits of tourism can be enhanced either by increasing the number of tourists or by increasing the duration of stay of tourists in the country. The nationality-wise data on duration of stay is very important and useful in the targeted promotion of tourism in the source markets.

Though the average duration of stay by foreign tourists in India (22.7 days) is significantly high, there is scope for further increase in view of the availability of a variety of tourism products, culture, cuisine, etc to offer the tourists by India. Among the major source countries, the duration of stay was highest from Yemen (62 days) followed by Nigeria (42 days), Canada (34 days), Portugal (32 days ), Tanzania (31 days) Pakistan (30 days) and USA & New Zealand (29 days each) 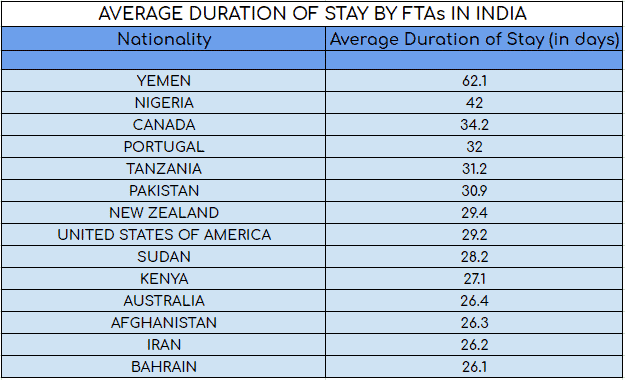 Indian tourism compared to the World – 2019

India’s rank in international tourist arrivals was 50th in 2000 and declined to 54th in 2002. However, since then, it has gradually improved. Since 2014, adhering to the definition of International Tourist Arrivals, India has started the inclusion of figures of arrivals of Non-resident Indians in its figure. This has resulted in an improvement of about 17 places in India’s position. India’s share in international tourist arrivals was, 1.24% in 2018. One among many other reasons for this would be the rising middle class and increasing disposable incomes that have continued to support the growth of outbound and domestic tourism 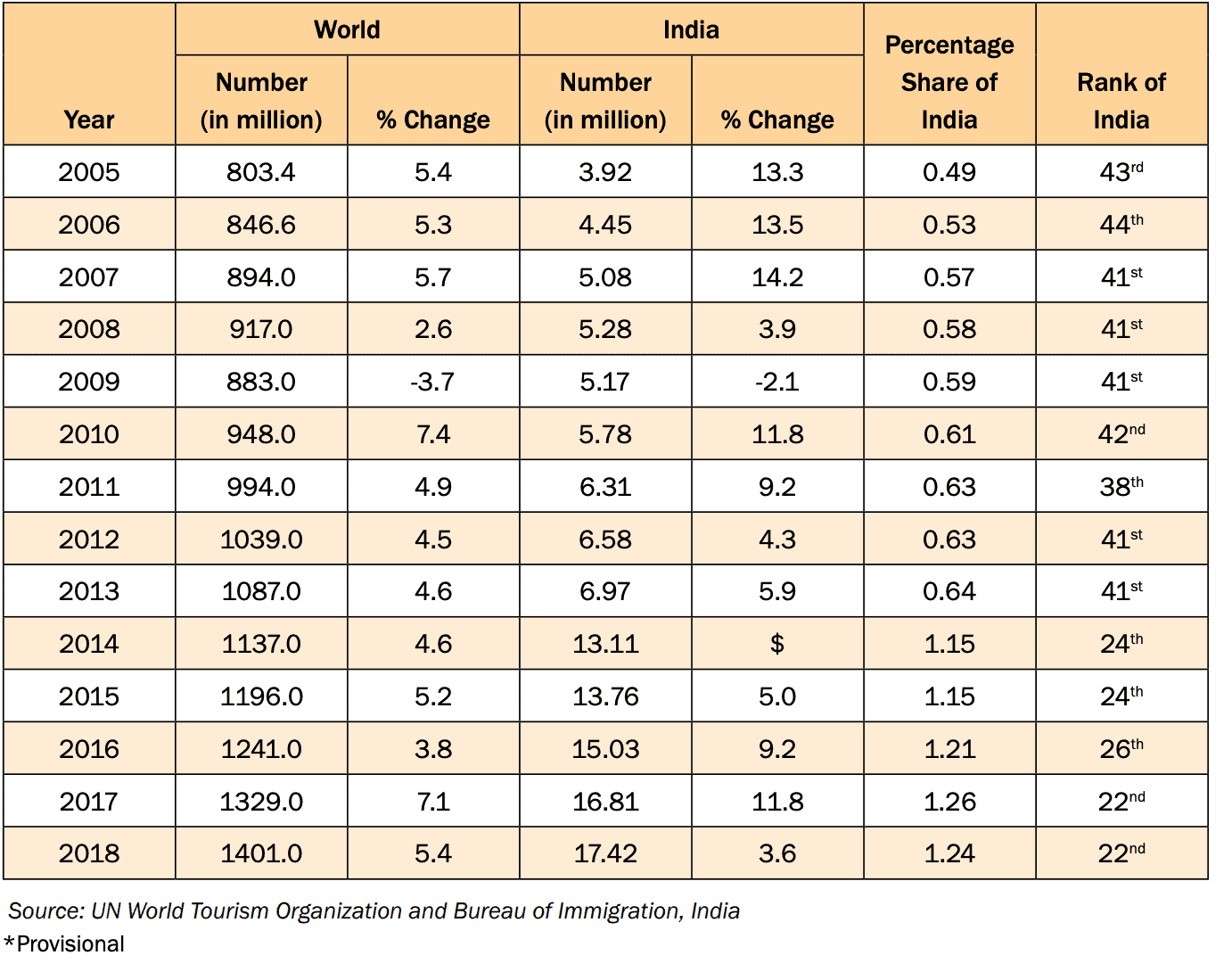 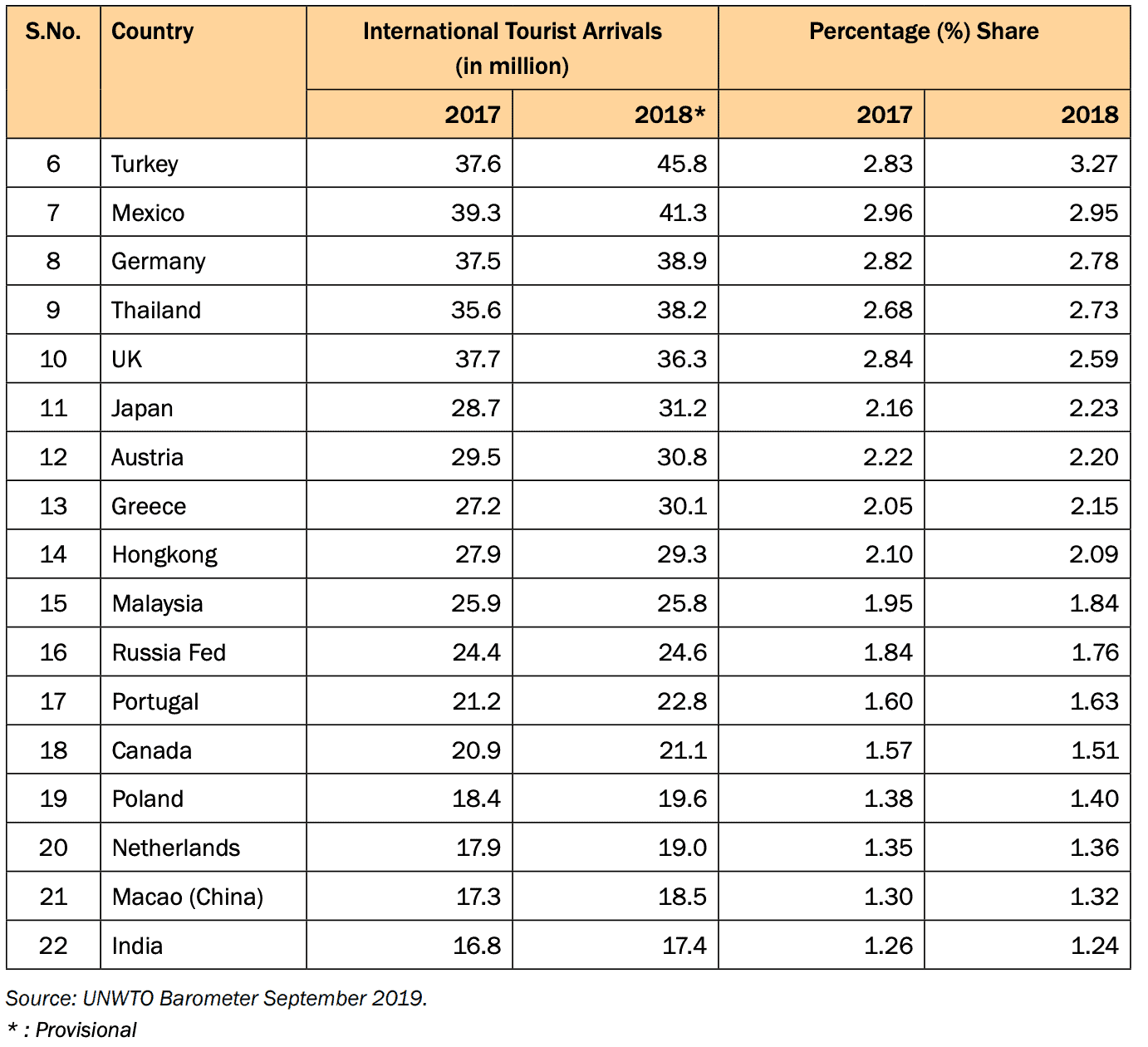 Tourism Receipts has been increasing steadily since 2002 and has reached 2.0% during 2018. International tourism receipts worldwide, which were hardly US$ 475.3 billion in 2000, have increased by 3.04 times to reach US$ 1448 billion in 2018. In 2019, Indian tourism Receipts were US$ 29.4 billion, about 2% of the international tourism receipts worldwide 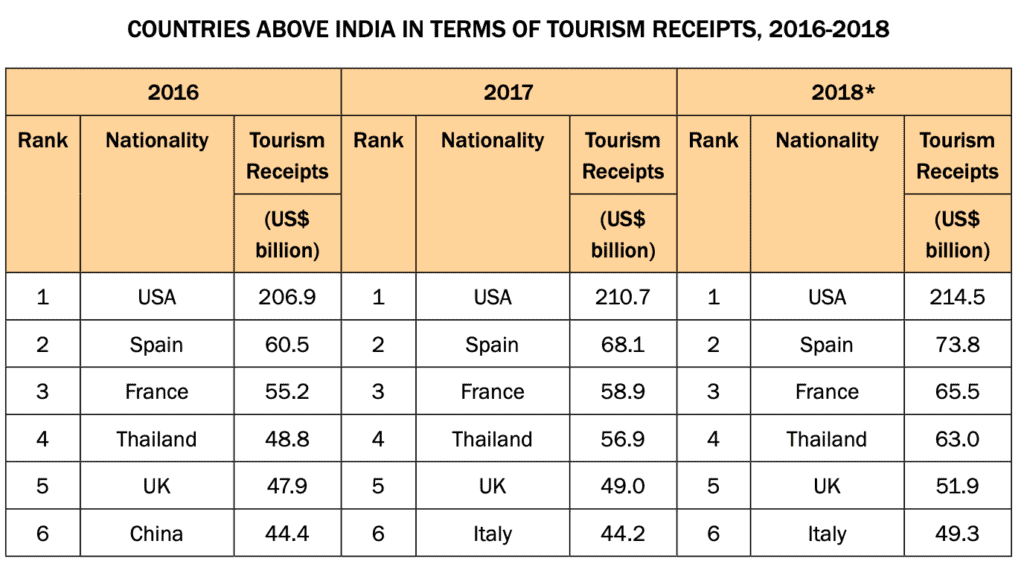 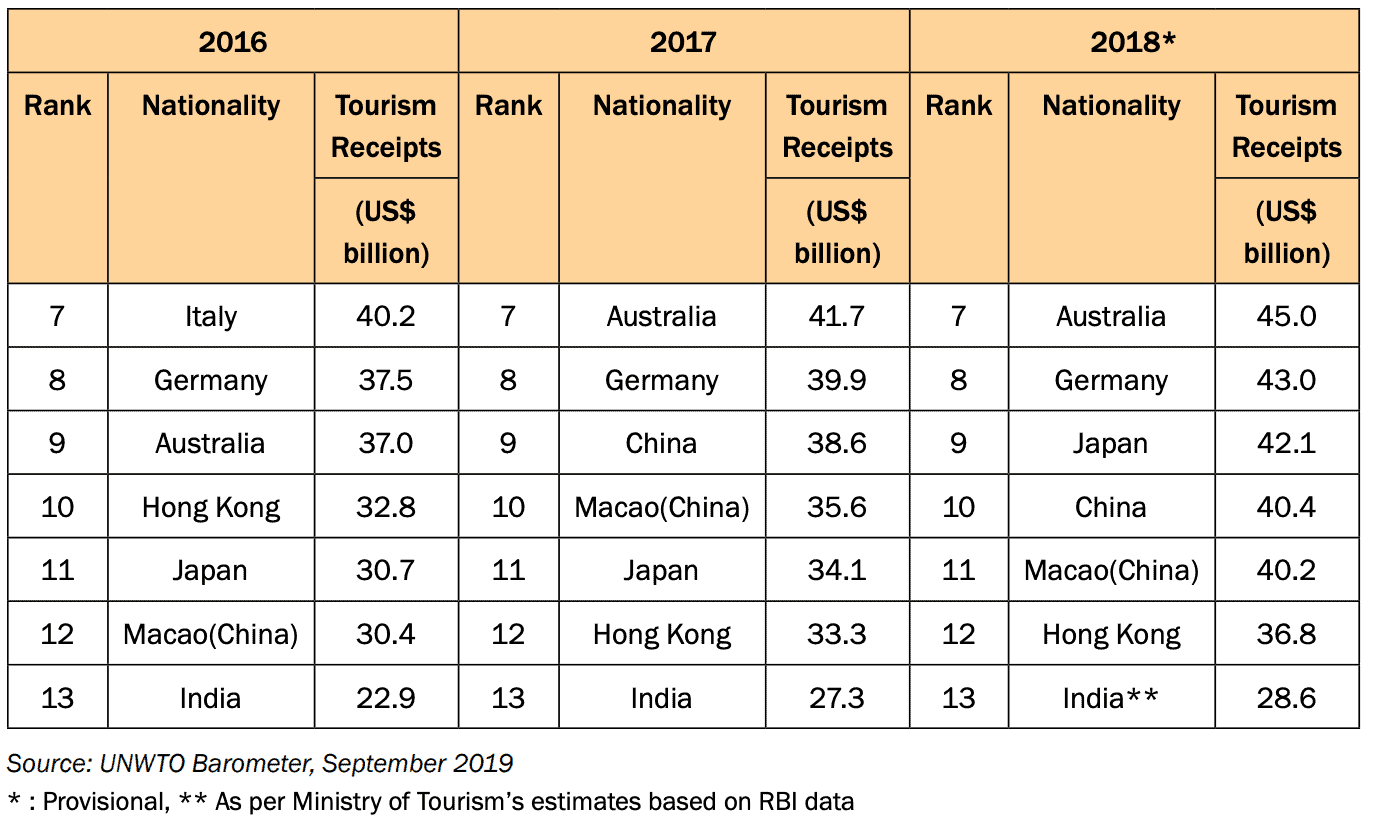 Over 5 million Indian E-Tourist visas were applied in 2019 since it was introduced in 2015. India E-Tourist visa was priced at $100 to free depending on the country of the applicant. This was changed to $25 for all countries in 2019 to boost inbound tourism. 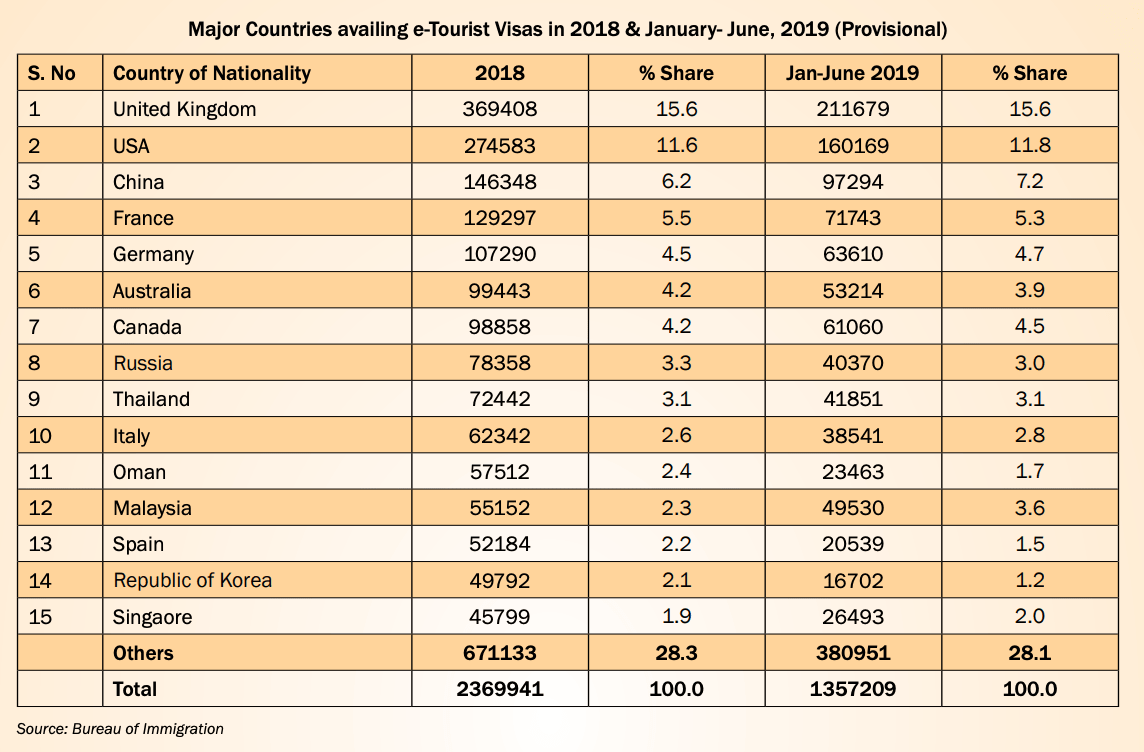 Analysis of the Foreign Tourist Arrivals (FTAs) in 2019

DESCENT IN THE TOURIST INFLOW:

ASCENT IN THE TOURIST INFLOW:

The rich culture, legacy, and melange envelop everything that is beautiful in India and that is the reason as Indians, we generally believe in the importance of outbound travel. Regardless of such diversity, how India is emerging as a great contributor to outbound visitors is always a question. The quick pacing GDP at 7% that straightforwardly deciphers the rising individual pay levels and accessibility of low-cost airfares gave way to a huge change onto the worldwide tourism scene as far as Indian outbound travel industry is considered.

Consistently more than 5.4 million Indians travel to another country for MICE(Meeting, Incentives, Conferences etc), study, shopping, leisure or to visit loved ones. 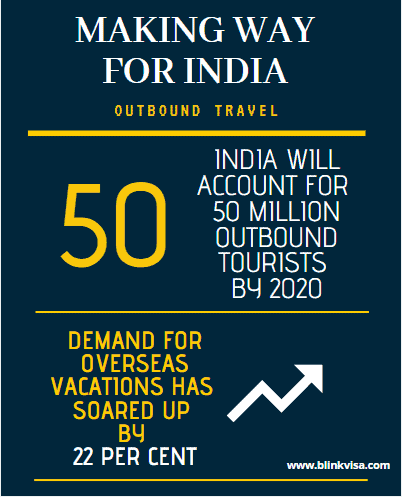 Most Favoured Countries by Indians for Tourism Purposes in 2019

The land of white elephants, exquisite Thailand proves again to be one among the most favoured destination for Indian travellers and Indians rank number six in overall foreign arrivals to Thailand. 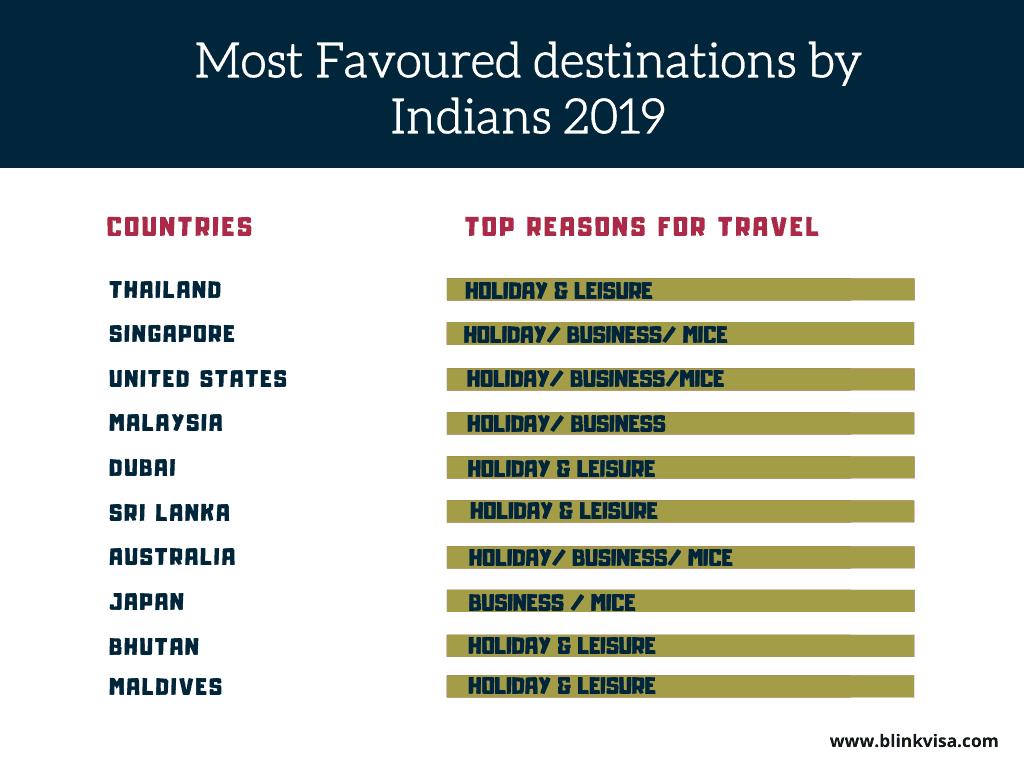 Travel motivation and purpose of visit:

The big fat Indian wedding is the second biggest expense made by an average Indian, next only to buying a house. Weddings in India cost as much as a fifth of the entire household saving.

Indians travel domestically 68 times more frequently than foreign trips. Our heritage and culture are spread evenly across the country and that is why people wish to explore more of our architecture and past through many tourist places. Domestic tourism has always been upscale over the past few years. The number grew up to 1.82 billion in 2018-2019.

Most Favoured Destinations within India 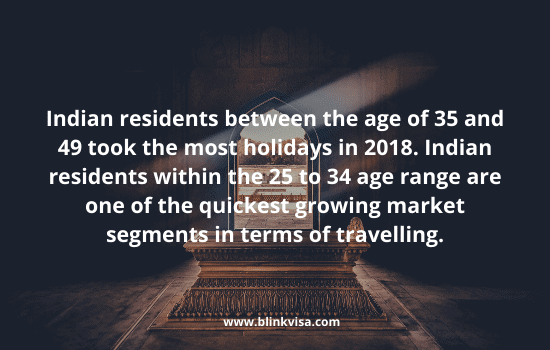 Prime Minister Narendra Modi requested Indians to travel to at least 15 tourist destinations in the country by 2022 with an aim to boost domestic tourism and energise the market. 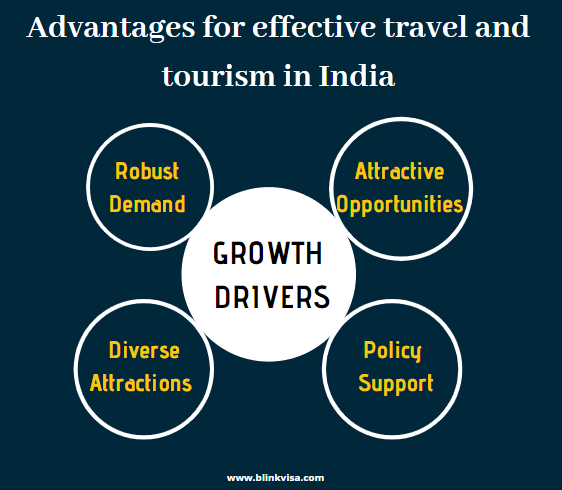 One of the major changes the Indian travel industry is adopting is the usage of artificial intelligence. The technology has brought so many online travel agencies across India to understand their customers. (CIO review India 2019) The data analytics enables 360-degree examination of a consumer’s profile. Also, AI-powered chatbots have also been the latest trendsetter.

According to Google reports (2017), 36% of consumers are willing to pay more for getting their personalized travel preferences using AI.

Right from booking tickets to getting a visa and travelling, digital trends have taken up in India and have definitely boosted the travel and tourism index. Online visas and platforms to book tickets have helped people to travel at better rates and better options at their own convenience.

According to Booking.com, 80% of customers prefer to self-serve in order to get the information that they need and also 73% of travellers would like to make sustainable travel choices

Advancement of camping has been encouraged because of the remuneration and its major source for additional economic opportunity. Along with that adventure and cruise tourism has also been widely adopted to increase the inflow of tourists. (Travel Market 2019)

People are now willing to visit more of unheard places like Tunisia, Jordan, Fiji and so on in order to satisfy their craving for exploring the unexplored cities. Also, health and well-being such as spa experience, dip in hot springs have been ruling every traveller’s itinerary list in recent times(Tripadvisor 2019)

Travelling during the off-peak period has been a new challenge and excitement among Indians. During a low season, travellers can get air tickets or hotel tariffs at discounted prices and visit their favourite places at their own pace avoiding the crowd. (Forbes 2019)

A word that is popularly coined using business and leisure, Bleisure means the way people are travelling to get a mix of both professional and personal experience. Travellers can attend their important business meeting along with spending a day or two for a memorable holiday. (Native Planet 2019)

India’s travel and tourism industry have enormous potential to grow over every period. Though the beginning of 2020, travel is one among the worst affected industries today because of the novel coronavirus or COVID-19 according to Hindu Business Line, we hope we will kick back and defeat the pandemic in the remaining few months to uplift the economy and boost tourism.

However, the road ahead is still yet to be accomplished and the top strategies for the next few years on the account of Indian tourism would be: